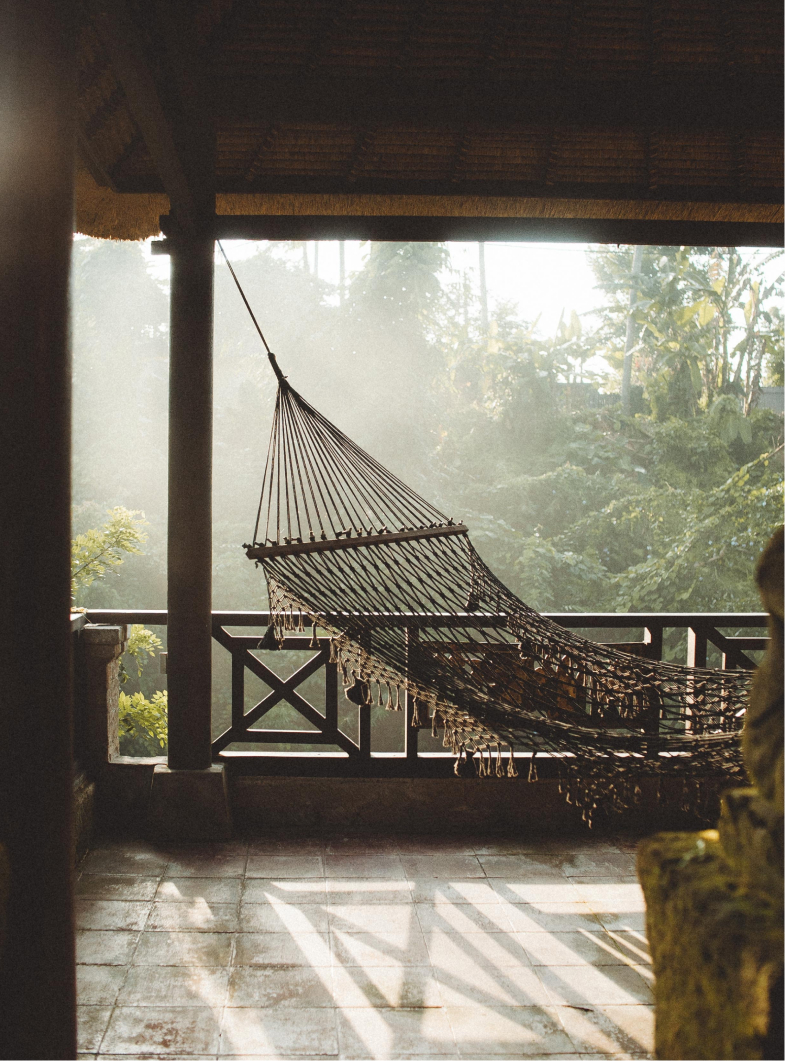 Jonathan Durling still remembers the tranquil motion he felt when, as a boy, he fell asleep swaying in the hammock that hung above his parents’ bed in Castanhal, Brazil. As he grew older, the child of missionaries would become enamored, then profoundly influenced, by the natural beauty and laid back culture of his country, first as an accomplished and sought-after photographer (much of the photography in the Sossego catalog is Jonathan’s), then as he dabbled in house design, and ultimately, as founder and CEO of Sossego, whose name is a literal homage to the peaceful lifestyle Brazilians enjoy, marked by long conversations with good friends while relaxing in comfort.

Years later, Jonathan had one such conversation over a dinner of barbequed ribs and sweet potato fries at Zingerman’s Roadhouse in Ann Arbor, Michigan, where his family had moved years earlier. He found himself across the table from musician and software designer-turned-furniture-designer Aristeu Pires, after mutual friends told them they simply had to meet. Pires, winner of Brazil’s prestigious Museu da Casa Brasileira award for furniture, talked of his love for pairing contemporary design with warm Brazilian wood; Durling, of his passion for building a business…and his 15 years in Pires’ South American homeland.

They left the dinner inspired. For Jonathan, a visit to photograph Pires’ furniture in Brazil left an emotional impression; the comfort in the design of the pieces was reminiscent of being wrapped in his childhood hammock. A partnership was born, and by 2016, Sossego opened at Chicago’s Merchandise Mart. After 300% year-over-year growth and a product line being represented by dozens of sales professionals, Sossego moved into its light-filled showroom at the New York Design Center, where visitors immerse themselves in Pires’ designs, the organic creations of artist Domingos Tótora, and minimalist lighting fixtures from Guilhermes Wentz.

Jonathan is now married to his childhood sweetheart Stephany, a native Brazilian. In true sossego fashion, when they put their children to bed at night, the routine starts with a good book or story told while curled up in a hammock. Nightly moments of tranquility and a life that’s come full circle for an entrepreneur who’s made the beauty and comfort of Brazil his business. 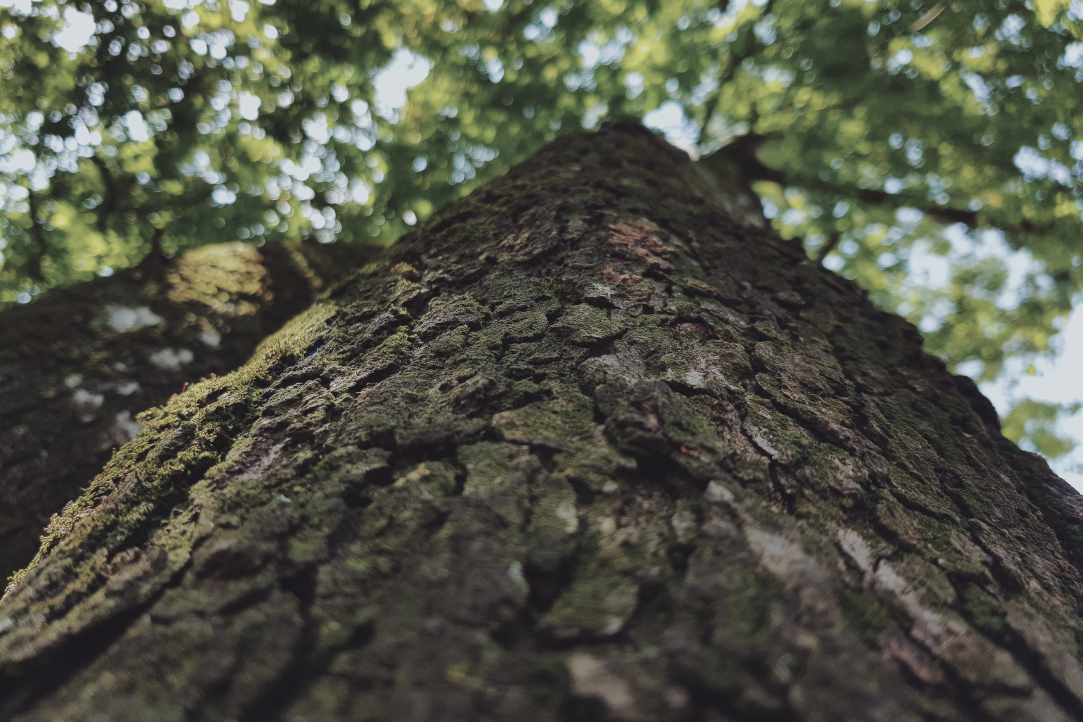 Sustainability is at the heart of our craftsmanship. Building beautiful pieces and ensuring long-term survival of the resources they’re made from are intermingled. So much so, we can’t imagine one without the other. Our sustainability ethos is guided by three pillars.

Timeless Design and High-Quality Build. Our furniture is modern, but not temporal or cutting edge. After all, they’re only truly sustainable if their design is timeless. Our pieces are hand-assembled with minimal hardware, so the wood becomes stronger when joined with wood, resulting in highly-durable furniture to be desired and passed on for generations.

Materiality. 95% of our product portfolio is made from premium native Brazilian wood. It’s not only beautiful, but uses less energy from process to production than other recyclable materials like glass and metal. To achieve Ibama certification, before using a tree, it is analyzed and carefully selected from an area where surrounding trees can remain untouched for decades, allowing those trees to fill the space surrounding the harvested tree. From forest to factory, every tree selected is tracked through a QR code and recorded into the federal system. A monthly audit of the factory ensures all trees are accounted for.

Giving Back. For every piece of wood furniture we ship, we fund the planting of a tree. Sossego is investing for the long-term wellbeing of the planet. In simplest terms, we’re helping create a healthy, enduring environment for our children and grandchildren and the world we will leave them. 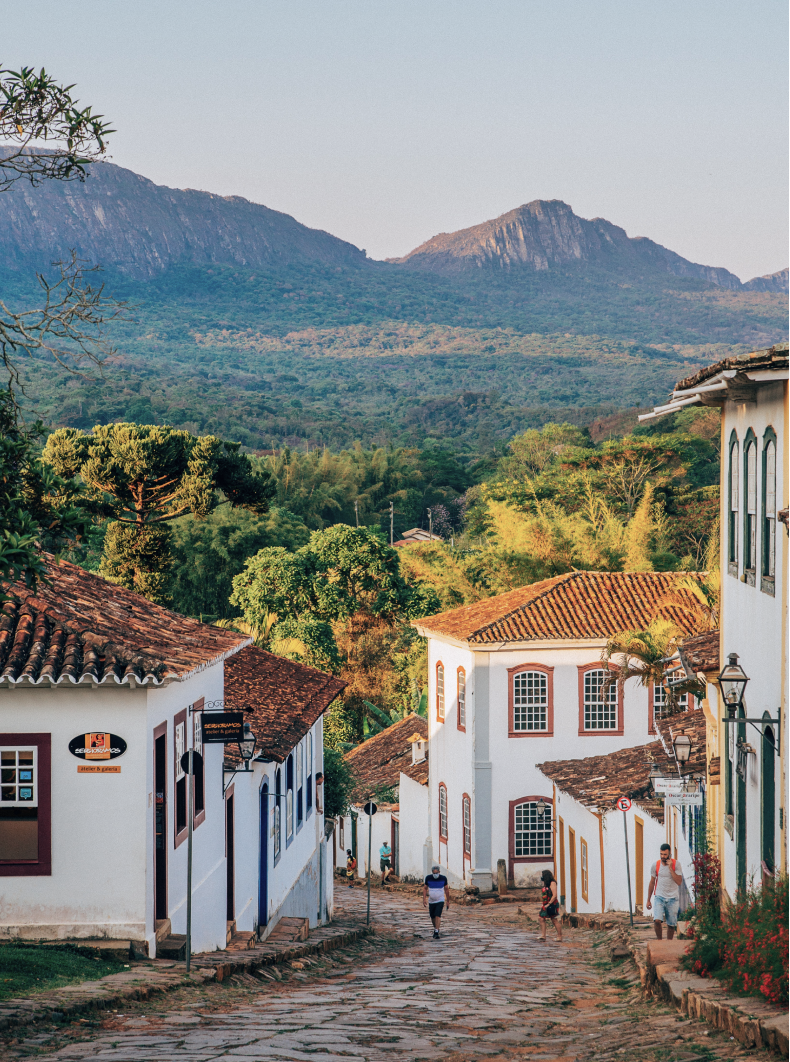 If food is the heart of a nation, Brazil’s heart beats most steadily in the state of Minas Gerais. The lush region is home to olive groves, coffee and sugar cane plantations, farm fresh cheese, and so much more that nourishes Brazil . So synonymous with great cuisine that restaurants across the nation bear names like “Little Minas”,  “Minas Spoon”,  and “Minas Oven. ”

The food movement began in farmhouses in cooler mountainous regions where, to prepare the national dish, feijoada , meats must simmer for hours or, preferably, up to two days for the rich, smoky flavors to reach perfection. In Minas Gerais, nothing is rushed. Here, the pace of life slows dramatically. This is the birthplace of Domingos Tótora, where time stands still and vestiges of a colonial era remain in centuries-old villages with winding , hand-hewn cobblestone streets, Portuguese architecture, ornate mansions, and baroque churches.

Minas Gerais directly translates to general mines, and for good reason. A wealth of minerals and precious gems continue to be sourced from this fertile land of winding rivers, hydro spas, mountains, and caverns.

Continuing to lead the country in productivity, Minas Gerais’ distilleries produce cachaças from the plentiful sugar cane, the main ingredient for the classic Brazilian cocktail, the caipirinha.

Minas Gerais’ food, hospitality, and relaxed way of life are the essence of Brazil. 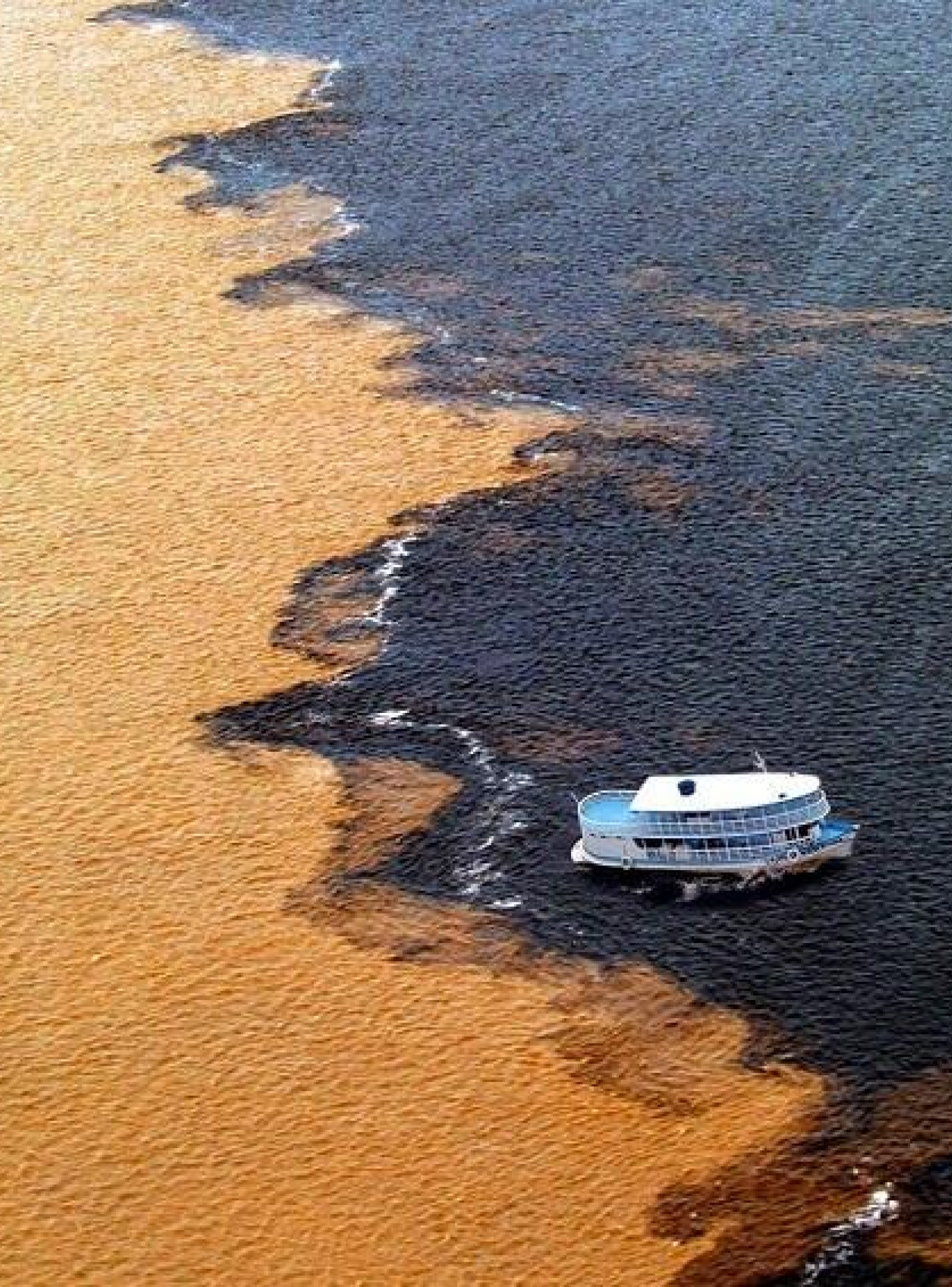 We adore a good love story.

At a point near Manaus, Brazil , the northern section of the Amazon, the Rio Solimões finds company in another river, the Rio Negro. For three miles, the two flow in parallel. They can see each other, but they haven’t met. Until ultimately, they do. The Rio Negro is a warm, inky blue stream while the colder, sandy-colored Rio Solimões flows twice as fast.

For six mesmerizing miles, their disparate waters touch, bubble and dance, cheek-to cheek, before giving up their differences in temperature and velocity to become simpatico. They unite in a confluence known as Encontro das Águas, or “Meeting of the Waters. ” The symbiotic waters power on to form the Rio Amazonas whose name was aptly inspired by a tribe of women warriors.

This natural spectacle is emblematic of the sometimes discordant but ultimately culturally rich country and the talented, burgeoning peoples that comprise the great and bounteous nation of Brazil.

A beautiful story of power and connection from nature herself. 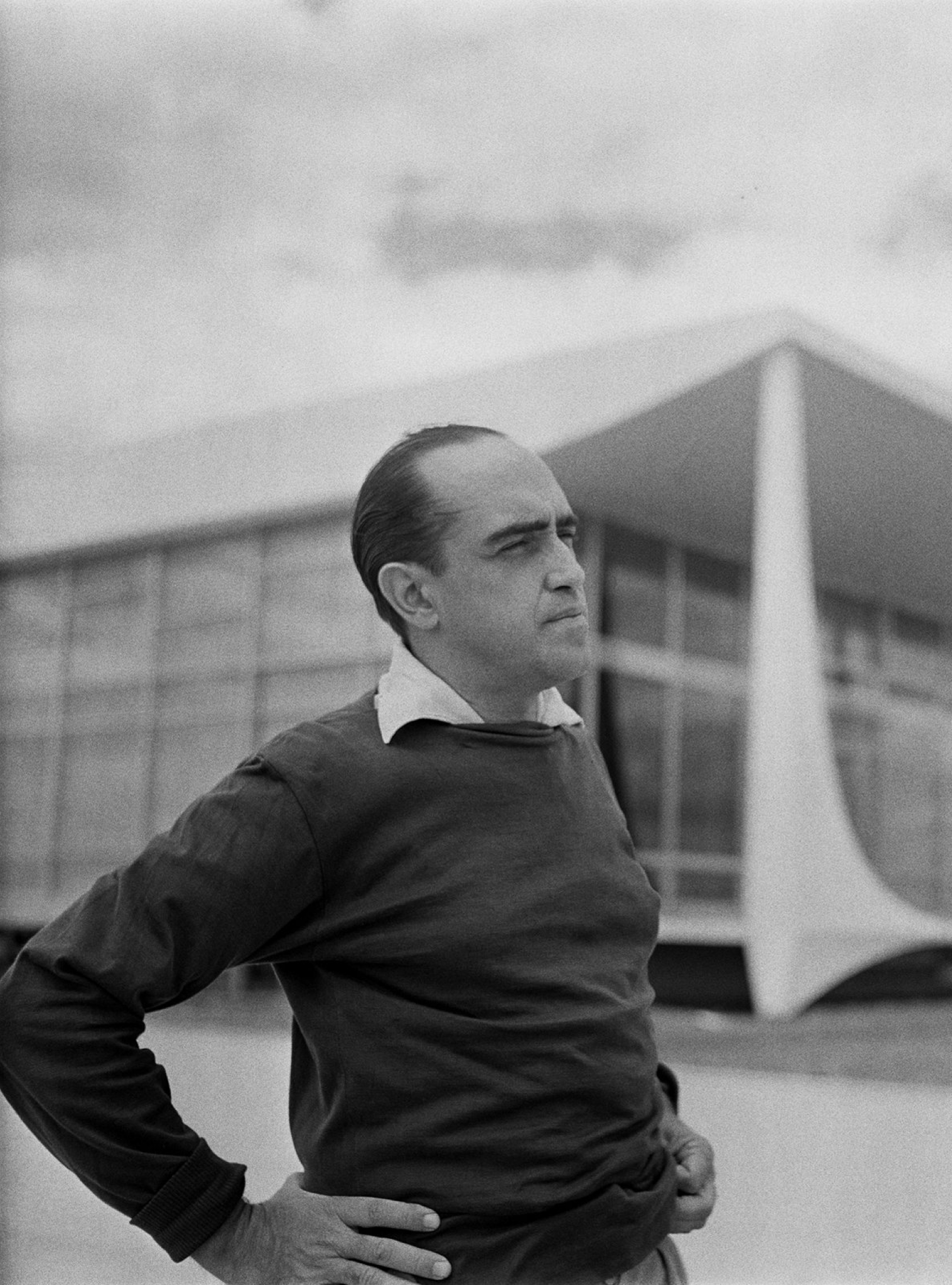 Not yet 60 years old, Brasília, the engineered utopia which rose from an open, grassy plain, is now the country’s fourth-largest city. Architect Oscar Niemeyer eschewed the international style for what were the most organic shapes ever to bloom in architectural history.

While visionary, Niemeyer ’s designs are quintessentially Brazilian. They incorporate brise solei l touches inspired by fazendas —colonial Por tuguese plantation houses. Undulating ing lines reflect the perpetual movement felt across the country from the Amazon River to the beaches of Rio de Janeiro—the beat of samba, and the vibrant culture that is the nation’s spirit.

Designed in the shape of an airplane when viewed from above (an homage to Le Corbusier), The city built for a jet-set age now houses all three branches of government . Niemeyer ’s experimental civic buildings were linked by common design elements that thrust him to global acclaim. He gained honorary membership into the American Institute of Architects, and was awarded the Pritzker Prize. Years earlier, Mayor La Guardia was so enthralled by the Brazilian pavilion at the 1939 World’s Fair, he gave the prescient 32-year old designer the keys to New York City.

Today, there is a joyful optimism and light surrounding the world’s largest modernist project . Its residents never tire of gazing at its fantastical architecture.

Aristeu Pires lived in Brasília from childhood to his mid-20s, when the city was shiny new. His entire oeuvre speaks from the design vernacular that is Brasília’s modernist architecture. 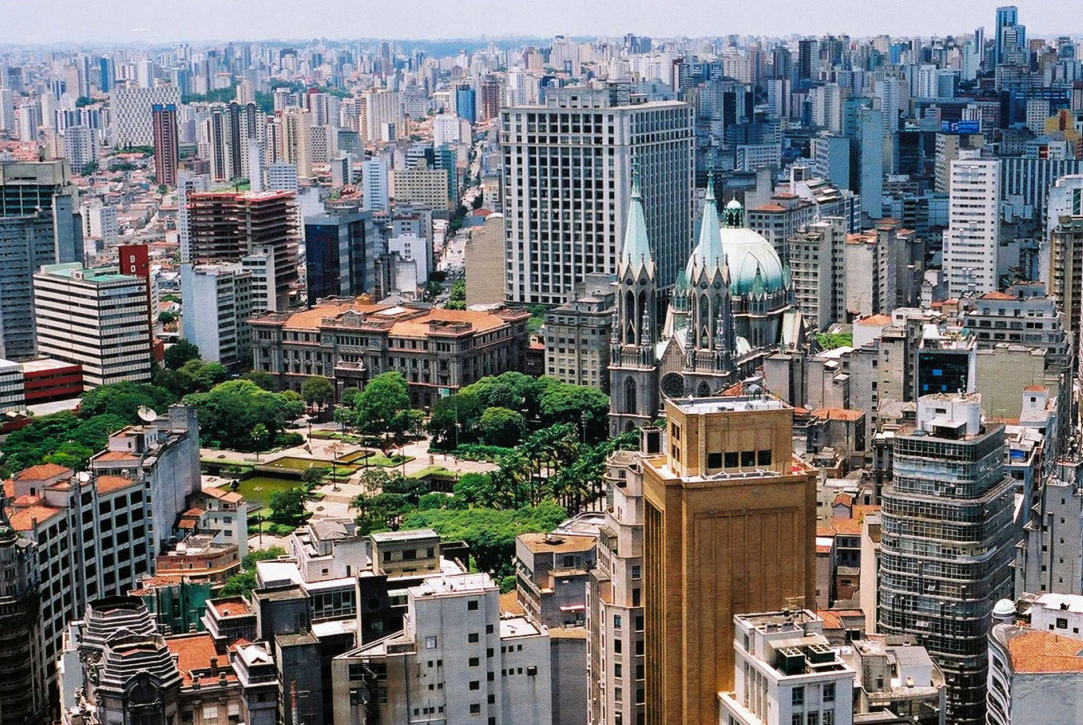 Where can you find a single restaurant serving authentic Japanese sushi , Brazilian churrasco , and Italian parmigiana? In São Paulo, the largest city in South America and, quite possibly, the craziest , most fascinating melting pot on earth in which there are more Italians than in all of Rome, as well as the largest population of Japanese outside of Japan!

It is a cacophony of architectural styles. Self described “humble architect of the third world” Marcio Kogan said:

“We don’t need to be concerned about environmental coherence, it is total chaos, the most absolute chaos. In this city, the world’s ugliest , which overflows energy, vibrant like no other, loved and hated, anything that is projected will be totally integrated into the city.”

Some say São Paulo’s beauty and vitality thrive on its apparent disorder. In contrast to the master-planned city of Brasília, São Paulo appears to have sanctioned a zoning free-for-all. It became the permanent beloved home to famed architect Lina Bo Bardi and others who left Europe following WWI I.

The Japan House Culture Center, designed by 2018 Interior Design Hall of Fame Inductee Kengo Kuma, opened in São Paulo near the famed Japanese district of Liberdade where, akin to Niemeyer ’s works in Brasí l ia, he incorporated a brise soleil façade. The WENTZ brand was launched here—the apex of the old, the new, and the yet to be.